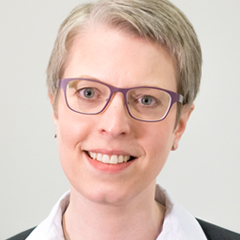 Louise Ward has held roles at Network Rail, Thames Water and the British Safety Council. Ahead of her opening address at this year’s Lone Worker Safety Expo, Mark Glover caught up with the Director of Health, Safety and Environment at Siemens to discuss the changing nature of work, the impact of technology and what motivates her to get up in the morning.

I first met Louise in 2013 when I was Commissioning Editor on the Safety and Health Practitioner (SHP) magazine. At the time, she was Head of Passenger and Public Safety at Network Rail; and a year later was promoted to Head of Health, Safety and Welfare. A spell at Thames Water followed and in 2016 she joined the British Safety Council as its Policy and Standards and Communications Director.

When we speak on the phone Louise is fairly fresh in her new role at Siemens as its Health, Safety and Environment Director. She oversees the mobility side of the business which encompasses transportation and rail, an industry she’s happy to return to. “It’s brilliant and I’m really loving it,” she enthuses. “I’m back in rail. There’s lots to do but it’s an exciting business which is currently going through a very exciting time.”

And busy she will be: Siemens Mobility recently won a £1.5 billion contract to build 94 trains for the London Underground; an epic project that requires, in-turn, the construction of a factory in East Yorkshire to complete the order, requiring her to visit the site regularly when operational.

Travelling the length and breadth of the country is nothing new for Louise though. She has an office in Euston, London but she tells me little time is spent there. “Generally, I’m out and about. We’ve got depots throughout the country. So, I’m either out on these depots or other office buildings,” she says.

Working remotely from home, coffee shops or on the train with no fixed base is common. As long as there is wi-fi then most employees can work as if they were in the office. However, Louise thinks this change in the nature of work is also changing the nature of lone-working.

“Traditionally, you might have thought of lone working as the contractor working at the far end of a depot doing a filter change on his or her own,” she says, “and we’ve been managing that kind of lone working fairly effectively for a number of years but now there’s been this big shift in the world of work where there’s a large staff number who might previously have been based in an office but are now location independent workers. There’s this population of thousands of people who are not checking-in or arriving at a fixed place of work at any point in the day.”

Isolation, she suggests, goes against the very nature of who we are as humans. “Human beings are essentially social species. We work best in groups and if you’ve not got that then you’re missing the chance to bounce ideas around with colleagues, or missing that person who you can turn to after a really difficult conversation or meeting,” she says.

But while technology is providing a new kind of challenge, it also provides a new range of solutions, particularly in communications. Software such as the cross-platform messaging service WhatsApp is being utilised by working populations to interact and share challenges, becoming a virtual coffee between workers in a virtual office kitchen. Recognising this and while at Network Rail, Louise instigated the platform for a group of recently trained level-crossing managers who were spread from Euston to Carlisle and worked alone. “We gave them a WhatsApp group and it was fantastic,” she recalls. “They were checking-in with each other all the time. If one had a difficult meeting, the others were there to provide support. It became the substitute for that face-to-face contact in a really positive way.”

Technology and wellbeing are themes of this year’s Lone Worker Safety Expo, alongside presentations on legislation and best practice. Louise thinks attending such events is vital for health and safety professionals. “Every aspect of safety risk management is about finding out what other people are doing and learning from their experiences,” she advises. “You can talk to people who are creating products and software solutions and help them to understand what they can do to innovate in technology and help you and your business.”

Like all these speaker interviews, I conclude by asking Louise what inspires her to do what she does. “I fundamentally believe that everyone should be going home at the end of the working day fit and well to enjoy their life,” she affirms. “Because you don’t go to work in order to go to work, you go to work in order to have a life, and the thing that makes me get out of bed in the morning is being able to unlock that for people.”

Louise’s forward-thinking approach was evident when we first met at SHP’s offices five years ago and it remains today. She is the ideal person to deliver the opening address at this year’s Lone Worker Safety Expo and I urge all delegates to take their seats early on October 2 to hear her introduction.

You can register for the Lone Worker Safety Expo here. It takes place on 2 October in central London and includes presentations from Doug Melia and Duncan Spencer among others.